How good is Mitra robot as compared to Honda’s Asimo?

You would not benchmark your automobile with an uber cool car like ThrustSSC that can run 1220 km/hr or Sunswift eVe that can fully run on Solar. Same works here.

Honda Asimo was primarily a tech demonstration project. It was to show that Honda can build advanced technology. It was never built to commercially sell those robots. If you had billions of dollars for R&D, decades of time and don’t have to concern yourself with practical day to day concerns (such as battery life), it is possible to produce amazing technology.

Here is a small example of what complex engineering we have to do:

The robot moves almost noiselessly and that required a lot of R&D from us. You might not mind the motor noise with Atlas or Asimo, but if you had to put through a robot every day in your office, you will complain of the noise. Again, we have to deal with children trying to get in the way and even jumping on top of it.

Apart from real engineering problems, we have to solve for social problems including facilities employees deliberately switching it off or not charging, people stealing the chargers, breaking its accessories etc.

Even with Honda’s massive financial backing the Asimo project was unsustainable and Honda has retired the project in favour of more practical (but less impressive to look at) robots. Honda retires its famed Asimo robot

This is the real big problem with robotics industry. While the headlines are grabbed the likes of Boston Dynamics and Honda Asimo, the real issue lies in economic sustainability of the resulting technology. Boston Dynamics, like the Asimo, didn’t lead to any real revenues. It’s no wonder Google sold Boston Dynamics to SoftBank

If you were running a car company, your challenge would not be to build the world’s fastest or biggest or smallest or even the most durable/mileage giving car, but a car that will get bought by users and that will pay for your R&D.

That is the focus that the robotics industry needs.

While we would love to look at Asimo and Atlas, ultimately those are like the Ferraris of F1 racing. We are looking to build a Ford Model T or Toyota Corolla – something that will be put everywhere and can satisfy day to day needs.

We are looking to solve the problem of how to get robots solve some of the practical problems that customers would pay for. What can Invento’s new robots do? The problem statements are different. 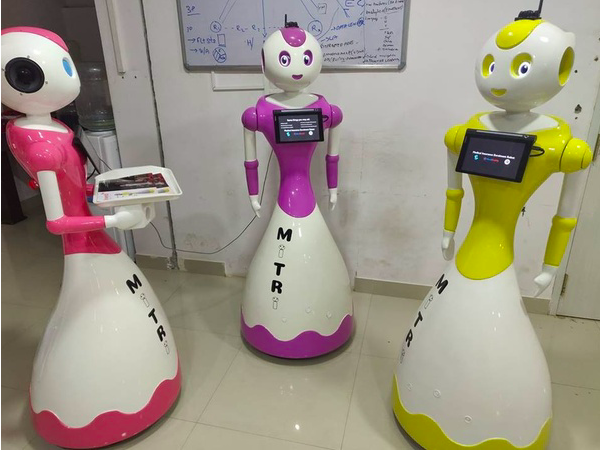 Given the fact that we are a bootstrapped company, we have no luxury to spend hundreds of millions or decades of effort like the creators of Asimo, Atlas or Sophia. We build robots that you can deploy today, integrate with IT & sales systems and make profits doing that.

These cannot do things like walking up the stairs. These are built for having conversation, collecting visual intelligence, do smooth indoor navigation and help marketing teams get real time data from their showrooms.